Accessibility
You are here: Home » Blog » 9 of the World’s Beautiful But Deadly Flowers 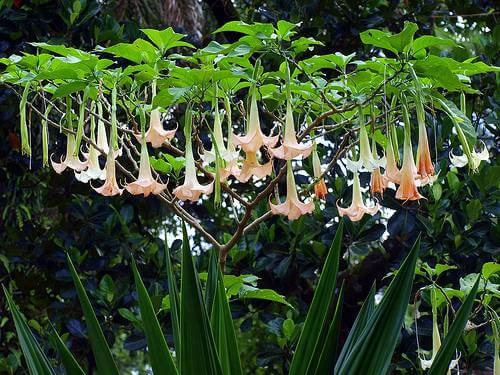 Hello everyone and happy October! I thought with Halloween near, it would be a good time to discuss beautiful, deadly flowers with some haunting charm! Poison is a means of protection to keep plants from being eaten. Some flowers are famous for their poison and are well known, while others may come as a surprise. Who would think that the tiny, white, innocent looking lily of the valley could hurt anyone? Some flowers cause minor irritation and sickness while others can cause death; children and animals are most susceptible due to their small size and lack of knowledge. Look around and you may find that you are surrounded by some of the most poisonous flowers.

Lily of the Valley: These dainty perennials have small, nodding bell shaped blooms with a lovely scent that I adore-but all parts of the plants are toxic. If eaten in large quantity, this plant can cause disorientation, blurry vision and can affect your heart rhythm, possibly causing death. Cardiac glycosides which alter the rhythm of the heart are to blame.

Daphne: Daphne is a pretty semi-evergreen bush with highly scented beautiful, poisonous flowers. The flowers come in clusters of rose, white, and purple and the plant has red or yellow berries. The fruit and leaves contain the poison diterpenoid, and just a few berries can kill a child. It can also cause skin irritation.

Rhododendron, Azalea, Laurel: I have some of these lovely shrubs growing outside of my house, and you may too-they are a very popular ornamental shrub in landscaping. These small evergreen bushes feature showy, large round clusters of beautiful, deadly flowers in shades of pink, red, lavender, white, and orange. All parts of the plant are poisonous and if eaten can cause a wide variety of symptoms such as abdominal pain, watering of eyes and nose, nausea, vomiting, and diarrhea; in severe cases paralysis, difficulty breathing, and coma can occur. Even honey from this plant can be toxic, and is called “mad honey.” Andromedotoxins are the culprit.

Monkshood, or Wolfbane: This ornamental perennial sports lovely racemes of blue-violet flowers and it is highly toxic. It has been used as poison for poison arrows where it grows native in East Asia. Although it is used in medicine as an analgesic and to treat inflammation and heart problems, the therapeutic and toxic dose are very close. If eaten, even small amounts of the plant can cause convulsions, paralysis, and death.

Angel’s Trumpet: Brugmansia, a member of the nightshade family, is a shrub or even small tree bearing beautiful, poisonous flowers. The trumpet shaped pendulous blooms in a variety of colors. This beauty is hardly angelic– it contains atropine and scopolamine, which are hallucinogens and poisons. The seeds are the most toxic, but the whole plant is poisonous if eaten. Tribes in the Amazon use the plant as a hallucinogenic in ceremonies, and it has also been used externally as a medicine. In Bogota, one ancient tribe gave the plant to slaves and wives to sedate them before burying them alive with their Masters. I don’t know about you, but I will never look at this plant the same way again!

Oleander: The oleander is a small evergreen tree or shrub with clusters of pink, white, or red sweet smelling flowers that grow in warm areas. The plant contains cardiac glycosides that when ingested cause cardiac arrhythmia and gastrointestinal distress. The sap causes allergic reactions and skin irritations. Despite its toxicity, it is beloved by many and societies dedicated to the oleander exist.

Nightshade, or Belladonna: Belladonna has a long and famous history. The deadly nightshade flower is small, red purple, and tubular shaped. The berries are black and look as though they may be good to eat, but they can kill you. The ancient Romans used it to poison enemies while Italian women used it to dilate their pupils, which they thought made them attractive. The deadly nightshade flower is used medicinally for many purposes such as pain relief, for Parkinson’s spasms, and for pupil dilation. All parts of the plant are poisonous if eaten, but especially the berries. The plant causes convulsions, hallucinations, difficulty swallowing, and rapid pulse just to name a few symptoms. Atropine and tropane alkaloids are to blame.

Hemlock: Hemlock is a tall plant with umbels of small, white flowers. It looks quite similar to wild carrot, and it is sometimes mistakenly eaten as such. Coniine and pyridine type alkaloids in the plant make it deadly. The effects of ingestion are convulsions, coma, and even death from respiratory failure. This is another plant that is famous in history; Greek criminals were often forced to drink hemlock juice, and this is how Socrates died. Medicinally Conium is used as a sedative and to treat spasms, and more.

Foxglove: Foxglove is a biennial plant planted for ornamental purposes in many gardens. It has stunning spikes of multiple flowers that can be purple, pink, white, rose, or yellow. All parts of the plants can be poisonous, causing cardiac difficulties and even heart attacks due to cardiac glycosides. This plant is the source of the drug digitalis, used to regulate heartbeat.

For more information on the most poisonous flowers, I encourage you to take a look at these links: