Accessibility
You are here: Home » Blog » Hold Your Nose For Some of These Foul Smelling Flowers 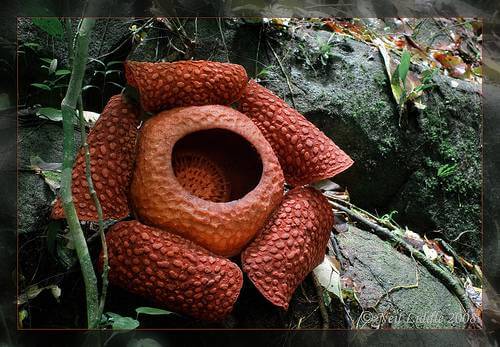 “Take time to stop and smell the roses,” the saying goes…but some flowers will make you want to hold your noses! When I think of flowers, I think of lovely, colorful, great smelling plant parts, and you probably do too. Few of us picture odd looking monstrosities that smell like rotting flesh, but the fact is there are more than a handful of such smelly flowers in the world.

Believe it or not, there is a reason for the bad odor these flowers emit – the stench attracts the flowers’ specific pollinators-flies, carrion beetles, and bats, for instance. Some of these stinky flowers are the biggest and strangest on earth. The Titan Arum, Carrion Flowers, and Rafflesia arnoldii, are some of the most famous stinking flowers.

The Titan Arum, commonly called the “corpse flower”, is perhaps the most famous of these stinking flowers. Amorphophallus titanum is a giant stinky flower, growing up to ten feet tall and has the second largest unbranched inflorescence known to man-and I can tell you from experience, it smells like rotting meat. It is a very odd looking flower, with a very tall yellow/green center spike known as the spadix, and an encircling frilly modified leaf that is a reddish brown color called the spathe. The many small flowers that make up the inflorescence are on the bottom of the spadix. The nasty smell comes from chemicals that produce sulfur, and the plant starts to smell when the spathe unfurls. Titan Arums, native to Indonesian rainforests, are very rare in the wild and in captivity and they only flower every seven to ten years. The giant stinky flower only lasts two days then collapses; if fertilized, large bright orange seeds begin to develop on the inflorescence. Most of the time, the plant spends cycling between a dormant corm and a single leafed plant. The Arum family contains other stinky members, such as skunk cabbage and voodoo lilies. I do not recommend sending these in a bouquet…unless it’s to maybe an ex-lover or former employer…ok; maybe they do have some good uses.

Carrion Flowers, commonly called “Star Fish Flowers”, bloom on succulent plants native to African deserts. The bizarre flowers resemble star fish and have leathery, hairy petals that look and smell like rotten meat. The smelly flowers can be ten inches in diameter, and can be red, yellow, or yellow with red stripes. Blowflies are attracted to the scent and look of the flowers; thinking that the flowers are rotting meat, they lay their eggs and leave laden with pollen; however, the maggots that hatch from the eggs will die as the plant has nothing the maggots can feed on. The most famous of the carrion flowers is probably Stapellia gigantea. You can actually buy these plants and grow them at home. I have, but only outside!

Rafflesia arnoldii also bears the common name of “corpse flower”, but it is nothing like the Titan Arum. This stinky corpse flower is the largest single flower in existence; it is the flower of a parasitic plant that lives off of the stems and roots of host plants of the grape family. Rafflesia arnoldii has no roots or leaves and can only be seen when the buds break through the bark of the host plant and bloom into large flowers. The weird looking flowers grow up to three feet in diameter and are a reddish brown color with white spots; they have five fleshy petals attached to a round hollowed out center in which the sex organs reside. Carrion flies are attracted to the putrid smell of the plant, lay their eggs on the flower, and leave with pollen stuck to their bodies. Like the carrion flower, this corpse flower provides no nourishment for the maggots and they soon die. Rafflesia arnoldii is another rare flower, found only in Sumatra and Borneo. The flower is becoming rarer due to disturbances by tourists coming to see it.

Although these flowers are not pretty in the conventional sense, and although they smell awful, I find them fascinating and I think you will too. Some Universities grow Titan Arums in their greenhouses-this is where I saw the stinky corpse flower. You may want to check out your local university greenhouses to see if they have a Titan Arum that will be blooming anytime soon. Other stinky plants, like skunk cabbage and Dutchman’s-pipe, can be found growing wild. Some strange stinky plants can be specially ordered. These are just a handful of bizarre and foul smelling plants; follow your nose and you may find more!

For more information on smelly flowers, take a look at these links: