Accessibility
You are here: Home » Blog » Profile of the Aster Flower – The Birth Flower for September 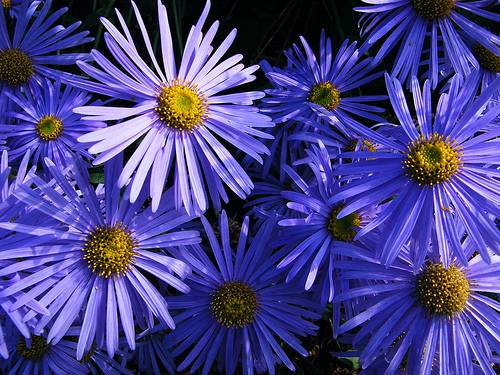 Give that special someone the stars when you send a birthday bouquet this month that includes the aster, the September birth flower. Aster is the Latin and Greek word for star, and historically asters were often called starwort or star flower. The September flower truly is one of the stars of fall, as it gives a great burst of color to the season when many other flowers are dying.

So here’s the run down on the awesome aster:

There are several types of asters, some of which grow wild in the United States. You have probably seen them and maybe considered them weeds; I often see the small, white, daisy like flowers growing along country roadsides when I travel. The September flower does, in fact, resemble a star in shape with a yellow disc at the center and elongated petals radiating from the disc. The yellow disc is actually comprised of several tiny tubular flowers. Asters come in shades purple, pink, red, and white. The birth flower for September may also have many layers of petals giving a ruffled appearance, or a single layer of petals. Many types of asters are popular to grow in the garden, such as the New England aster; however the aster most commonly used in floral arranging is the China aster, which is native to China and Japan. China asters look a lot like chrysanthemums, with doubled petals and flowers reaching approximately four inches in diameter.

September Flower of the Month: Asters for Fall Color (pdf)

Legends of the Aster

I’d like to consider myself a bit of a mythology buff – one of the few electives I enjoyed during business school. There are many legends surrounding the birth flower for September. One myth states that the god, Jupiter, flooded the earth due to his anger at men. All the gods and goddesses left the earth, and Astraea was one of them. She was turned into a star. Two humans faithful to Jupiter remained after the flood. Astraea felt so much anguish for the desolation they were left in that she cried and her stardust tears became asters, also known as star flowers, when they hit the earth.

Another legend about asters comes from the Cherokee tribe. A war between tribes decimated two villages except for two sisters wearing yellow and lavender fringed dresses. They hid in the forest and found a medicine woman and asked her for help. She turned one into an aster and one into a goldenrod to save them from being killed by the enemy.

Asters and Goldenrod: The Mythology

History of the Aster

Historically, these September flowers were made into wreaths and placed on the altars of gods, as they were believed to be sacred. The people of medieval Europe believed that burning the leaves of asters would scare away snakes. The aster plant has been used in herbal medicines for a variety of illnesses all over the world and by different cultures; one of the most popular uses was the burning of leaves and flowers to produce a smoke to be inhaled for various ailments or to drive away evil spirits.

So, what does it All Mean?

It is believed that the first use of the September birth flower was in Roman times, when gifts and flowers were given at birthday celebrations. The September flowers symbolize love, faith, wisdom and valor – tying in nicely with the themes of the myths I mentioned. Asters are perfect to send for September birthdays, but they should not be overlooked for September anniversaries as they represent faith and love. Asters can be given year round as they are beautiful and meaningful for any occasion.

Here’s a bit more info I found about asters: