Accessibility
You are here: Home » Blog » Beautiful Flowers Made In Frost 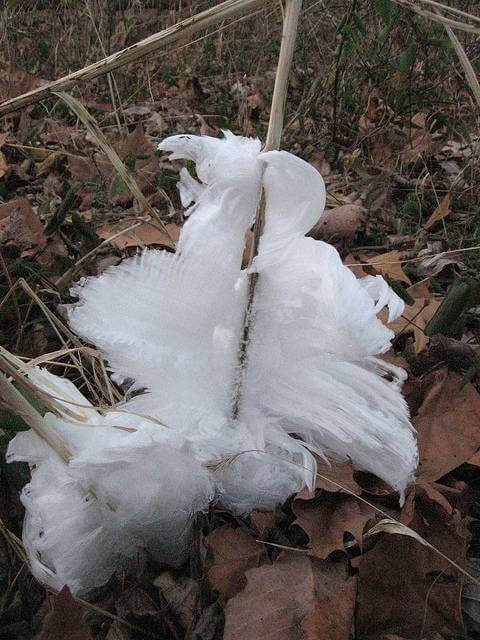 You may think that all of the flowers have gone with winter’s approach, but I am happy to say you are wrong. If you like the magical icy scenery in the animated fairy tale Frozen, then you will love frost flowers. When I first heard of frost flowers, I thought that they were the intricate frost patterns made on a window pane or the amazing shapes of snowflakes. Actually, they are unusual botanical phenomena that occur this time of year in the areas that are getting ready for winter. Some frost flowers resemble delicate ribbons of white ice curled into petal-like formations, while others look like strands of hair or needles. In fact, some other names for frost flowers are “ice ribbons” and “hair ice.” Frost flowers may have many names, but all are rare and fleeting beauties.

Although frost flowers appear to be magical, they are explained purely by science in a process known as ice segregation. Ice segregation occurs when the ground surface temperature is still warm and above freezing while the air temperature is freezing or below freezing; typically, this happens in late fall or early winter. The freezing temperatures cause the sap in the plant stems to expand, thus creating cracks in the stem. Because the ground is still warm, water is still able to move up the stem from the ground. The water then flows out of the cracks and quickly freezes; more water follows and builds upon the already present extruded ice forming beautiful and bizarre formations that look like petals and ribbons. Plants with long stems are more likely to develop frost flowers. Some plants that commonly form them are white crownbeard, yellow ironweed, and dittany.

The frost flowers I described above are generally referred to as the ice ribbon type, but there are other kinds as well. Hair ice resembles silky white strands of hair, or threads. I think it looks like the silky white seeds found in milkweed pods. Hair ice forms when ice segregation occurs on wet, dead wood with fungus. In this case, the water oozes out of holes in the wood, giving it the hair-like appearance. Needle ice is not actually related to plants but is when ice segregation occurs in soil, forming needle-like crystalline structures similar to hair ice. Pebble ice forms on rocks, bricks, and pottery in a similar fashion as frost flowers do on plants. Occasionally, ice ribbons form on hollow metal tubes; unfrozen water inside the tube leaks out of a crack or hole and freezes when it hits the air, and this continues until multiple layers are formed.

How to Find Frost Flowers

Unfortunately, the frost flower is one flower that you cannot pick. They are extremely delicate and will break or melt at the slightest touch. If you would like to see one in person, the best time to look is early in the morning in late fall when the air temperature is at freezing or below. Usually, they form overnight and are only seen in the early morning; exposure to sun generally causes them to melt. Frost flowers last longer in shady areas. Look for plants with long stems, especially those mentioned above. In fact, if you live in an area with the correct climate, you may want to try planting flowers likely to produce ice flowers. Make sure that you take your camera because it is the only lasting way to capture the fragile flowers.