Accessibility
You are here: Home » Blog » The Month of the Marigold: The October Birth Flower 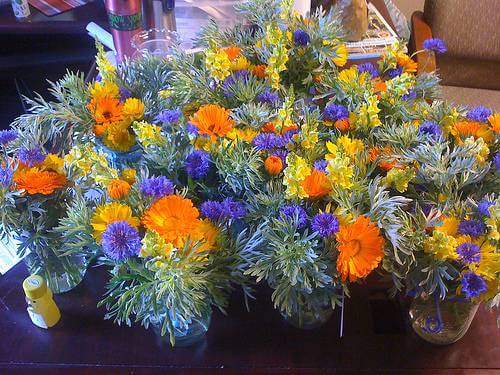 Hello everyone, this is Ava and I want to wish you a happy fall! The season has arrived with the beautiful oranges, reds, and yellows that it is famous for. How appropriate that the October birth flower is the marigold, which comes in these same colors. Give a friend a bouquet of marigolds this month to celebrate a birthday or the coming of fall! This October flower is an old fashioned favorite due to its long lasting bloom time and hardiness. As humble as the marigold is, I was very surprised to learn of the October birth flower’s rich history in my botanical studies.

Several plants bear the common name of marigold, but either the common red and gold native Mexican marigold or the calendula is considered the October birth flower. Although both plants share the common name of marigold, I can tell you that botanically they are not the same plant. Calendulas are yellow or orange daisy like flowers with either single or double petals from the daisy family and are native to the Mediterranean. Common marigolds are native to Mexico and the flowers are traditionally a mix of red and orange ruffled petals, but can be orange, yellow, red, cream, maroon, or a mix of red and orange.

What’s in a Name?

The calendula was the plant first named “marigold” — the word marigold is a combination of the words “Mary’s gold”. These golden October flowers were placed on altars to Mary in place of golden coins. The marigold was also considered Mary’s flower because it bloomed during festivals in honor of Mary. The scientific name, Calendula officinalis, got its name because the plant always bore flowers on the calendae, or first days of the month. Over time, other flowers became known as marigolds as well, especially the similarly colored Mexican flowers of the Tagetes genus that we think of when we hear the word marigold today.

Uses and History of the October Birth Flower

Both types of October flowers were historically used for adding color and flavor to foods and drinks, for medicinal purposes, and for dyes. Even today the calendula is used widely in herbal medicines due to its antibacterial properties and in cooking. I like to add a few calendula petals to my salads to add some color, and I also like to use calendula cream for my skin.

The marigold cultivars of the genus Tagetes are native to Mexico and South America. It was brought back to Europe in the 1500s through both France and African countries, where different varieties developed. This is why you will find both French and African marigolds at the garden center; but both are Mexican in origin. Even in the 1900s English soldiers were treated with oils from modern varieties of marigold. Some types of marigolds repel nematodes. Currently, only some species of the Mexican marigold are edible. The oil of both marigold plants has many uses; there is a huge industry built around it.

Interesting Facts about the October Flower of the Month

Today in Mexico, the marigold is the flower for the Day of the Dead. Mexicans decorate graves and cemeteries with marigolds and use the petals to make a pathway from the grave of loved ones back to the deceased’s old home. It is said that the pungent scent and color of the October flower attract the spirits of the dead and leads them back home.

In India, marigolds are sacred to the Hindus and are used widely in Indian weddings and festivals; they are commonly made into garlands. When paired with poppies, they are supposed to mean “I will soothe your grief”. The October flower of the month is also used in Muslim ceremonies.

In England, the marigold is used for divination of love. Because they are associated with the Virgin Mary, they were considered good luck and protection from evil; conversely, their meaning in the language of flowers is grief and sorrow, but the October birth month flower also means “I will comfort your grieving heart”.

Marigolds are a noticeably phototropic plant, which means that they follow the sun turning their flower heads toward it throughout the day. They open in the late morning and close in the evening. For this reason they were used as an early sort of clock. Because of their consistency, they were often used in bridal bouquets to symbolize constant and enduring love.

For more information on marigolds, please visit these links:

Flower for You: Marigold

Herb of the Season: Marigold

Edible of the Month: Marigold and Calendula