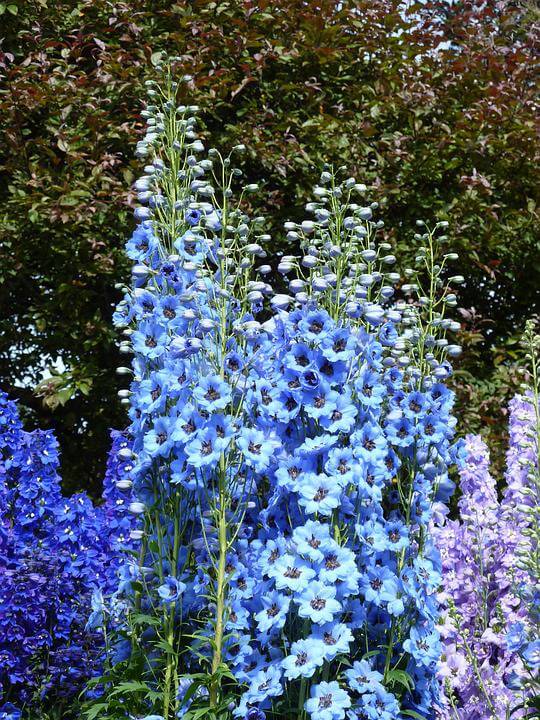 All of my friends know that I love weddings and the whole wedding planning process, so when it was time for my girlfriend (and one of my bridesmaids) to get married herself, she asked for my help. I assured her that we would plan the most beautiful wedding she could imagine. She wanted to go with larkspurs for her flowers, since she was getting married at the end of July and both she and her fiancé were born during the hot summer month. I found out a lot of great and interesting information when researching the flower for her nuptials.

The larkspur can be found in colors ranging from blue and lavender to pinks and reds and lighter colors as well, such as white and yellow. Found primarily in the northern hemisphere, the larkspur also grows in the higher altitudes of the African tropics. The yellow larkspur, called the Baker’s larkspur, is primarily found in California.

There is a very interesting mythological story behind the larkspur. It was believed in Greek legends that the mother of Achilles had asked that her son’s armor be given to the bravest man during the Battle of Troy. Ajax was very brave and expected to be given the armor, but unfortunately, it went to Ulysses instead, which greatly upset Ajax. The legend states that Ajax threw himself down onto his sword, killing himself. Supposedly, purple larkspur grew everywhere that there was a drop of blood on the ground from his horrific suicide.

Although the larkspur has many positive meanings, the pink larkspur can represent being fickle. The white larkspur represents being happy, and the purple larkspur represents one’s first love. Other interesting meanings behind this lovely flower include having a kind disposition, a love for laughter, a strong admiration for someone, love and affection, purity of heart, and lightheartedness. The larkspur is usually used for its fragrance in candles and cosmetics but is also used frequently as cut flowers for its lovely aroma.

Larkspurs are not good plants to be transplanted, so where you plant them is where they need to stay. Plant the seeds during the springtime or fall about six to eight inches apart. Be sure to place them level with the surface of the soil, then fill in the soil, then gently tamp down the soil. When watering, be sure to allow the water to get down deep into the soil so that the roots will be watered well, but don’t leave standing water. This will help them to develop but not rot.

For the best care, apply compost every spring, then add at least two inches of mulch to keep the moisture in and help keep the weeds out. Be sure to water them during the summer unless there is more than an inch of rain per week: The flowers do best if the soil doesn’t get dried out at all. Use stakes for taller plants, and cut the stems back after a frost. Also, trim the plant to the ground after the blooms are gone in November.

Used to help get rid of body lice, head lice, and scorpions, the larkspur is poisonous to most animals. It was an old wives’ tale that the larkspur wards off evil spirits. In Transylvania, it was used in barns and on farms to prevent witches and evil spirits from casting spells on and harming the animals. And Native Americans have used blue and purple larkspur flowers to create blue dye for clothing.