Accessibility
You are here: Home » Blog » How Flowers Become Fruit 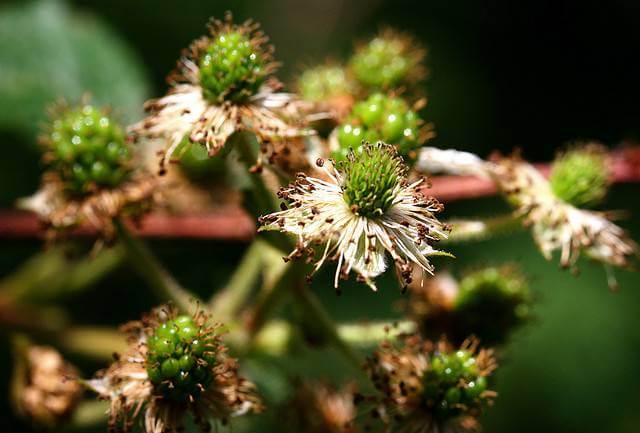 How many of us stop to consider how fruit comes about when we reach for that apple or blackberry? Not too many of us, I will wager. Technically, a fruit is the ripened ovary of a plant which contains a seed or seeds; thus, even beans, nuts, corn, and many other foods you wouldn’t think of as fruits are fruits in the botanical sense. The process in which a flower becomes fruit is quite fascinating and depends on many factors.

Why Don’t All Flowers Become Fruit?

First of all, you may be wondering why all flowers do not develop fruit. The truth is many flowers do develop fruit but we just don’t realize it; I know I didn’t. Roses develop rosehips which are fruit, and many plants develop seed pods, grains, or nuts which are technically fruits. Some flowers are strictly male, so they will not develop fruit, and other flowers have been made sterile through hybridization. Some flowers reproduce so well asexually that they have no need for flowers.

Pollination of the Flower

The first step of fruit formation starts with a pollinated flower. Some flowers pollinate themselves, while others depend on wind, humans, animals, insects, or other methods to bring pollen and ovules from different or the same plants together. For species that depend on cross-pollination, weather conditions and the number of pollinators can be a factor in how many flowers actually become fruit. By manipulating pollination, scientists and gardeners have created many new varieties of fruits, and many types that are resistant to various diseases.

In order to explain how a flower turns into a fruit, I will take you on a trip down memory lane to high school biology class where most of us learned the parts of a flower. The female part of the flower is referred to as the carpel, and it consists of a long slender tube called the style which leads down to the rounded base which is the ovule-filled ovary. Surrounding the ovule is the pericarp which matures into what we consider the fruit; if can be fleshy as with an orange, or dry and hard as with an acorn. On the top of the style is the stigma, which is generally sticky in order to catch pollen. The male part of the flower is referred to as the stamen and it consists of a long slender filament topped by the pollen-containing anther. When a grain of pollen reaches the stigma, it creates a pollen tube for the sperm to journey down the style and fertilize the ovule; fertilized ovules become seeds. Fertilization is the death of the flower, as the petals drop or wither at this point and the ovary starts to enlarge and ripen into what we know as fruit.

Variations on a Theme

We all know that there are all kinds of fruit and that they can be quite different — why is that? Well, let’s look at the blackberry for example; the blackberry flower is composed of numerous carpels and thus numerous ovules. Each of these when fertilized become a separate fruit, but are held together by a receptacle; fruits of this type are known as aggregate fruits and they include raspberries and strawberries as well. Simple fruits form from a single carpel or many fused carpels in one flower; examples of these are lemons, beans, and peas. Some fruits are known as accessory fruits — the apple and pear are examples. The part of apples and pears that we eat is not a swollen ovary, but a swollen stem and the ovary is actually the core. The pineapple is known as a multiple fruit and develops from an inflorescence which contains multiple ripened flowers. There are many other kinds of fruits as well, but these are some of the most popular. The fruit serves to protect the seed and to help disperse it later on.

After pollination, there are many things that can happen while fruit is forming. Weather conditions greatly affect yields. Fruit needs a lot of water to develop and if there is not adequate rainfall, fruit may fail to grow if not irrigated. Temperatures will also affect fruit set and ripening, as will hail and strong wind. Pests and disease are other problems that can decimate a fruit crop; choose pest and disease resistant varieties for best results. If everything goes right, over time the fruit will grow and hormones will kick in which make the fruit flesh become sweeter and change from green to the beautiful colors that we are used to.

At long last, your fruit is ripe and now it is time to enjoy it; but first, you need to realize that you aren’t the only one that wants to enjoy it! Birds and animals are going to want to reap what you sowed, so think ahead and drape your trees, shrubs, and plants with bird netting and fence out the rabbits. Some gardeners suggest feeding the wildlife well so that they will not want to eat the fruit. Stop and think before spraying the fruit with anything yucky to deter animals, because chances are you won’t want to eat it either; I know I am not fond of pepper-sprayed strawberries! When humans and animals eat fruit, they are starting the plant life cycle over again by spreading the seeds that may someday develop into new plants and thus new fruit.