Accessibility
You are here: Home » Blog » 11 Unexpected Uses for Flowers 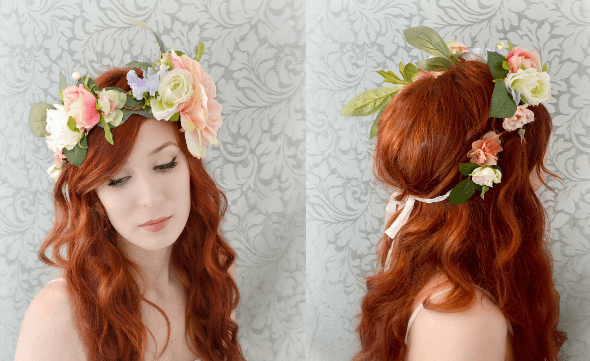 Flowers are more than just pretty faces. They have been used for centuries as sources of food, drink, medicines, and more; today, using flowers for these purposes is making a comeback. You may be surprised at some of the other practical ways that flowers can be used. I personally love making flower teas, crafts, and salads; I encourage you to try adding flowers to your diet and crafts as well.

Flowers have been used to make teas for centuries. Chamomile, jasmine, and bee balm flowers are just a few flowers that are used to make teas. Flowers, leaves, and roots from a variety of other plants can be used to make tea as well. These beverages often have health benefits in addition to being tasty drinks. I especially enjoy blooming teas, which are as beautiful as they are flavorful.

There are a multitude of medicines and drugs made from plants, as you probably know; however, some are made from the actual flowers – not just the leaves or roots. Chamomile flowers are used in poultices for sprains and bruises as well as essential oils. Lavender flowers are widely used in aromatherapy for their calming properties. Hops flowers are used to make sedatives. Santonin, a type of wormwood, has flowers that are used to treat worms.

Sometimes, flowers are so beautiful they look good enough to eat-and sometimes, you can! Edible flowers make a beautiful and surprising addition to salads, baked goods, and meals. Nasturtiums, chive blossoms, and violets are just a few flowers that add flavor and interest to salads. Squash flowers and dandelion flowers can be battered and fried. Lavender flowers are tasty added to cookies, while pansies and violas can be candied and used to decorate cakes. It is extremely important to make sure the flower you are eating is indeed edible, as many flowers will make you sick if you eat them. It is also important to make sure no pesticides have been used on flowers you are going to eat.

Many of the first dyes were made from flowers. Yarrow, calendula, saffron, and golden rod are just a few flowers that can produce a yellow dye in fabrics. Safflower produces a red or yellow dye, while foxglove produces chartreuse. Hollyhock flowers produce different colored dyes depending on the flower color.

Don’t throw out that beloved bouquet! Dried flowers can be used to make a variety of crafts. Wreaths, potpourri, arrangements, collages, mobiles, and jewelry are just some of the things that you can make with dried flowers. One of the best ideas that I have encountered is to take petals or pressed flowers from a wedding bouquet to make resin jewelry. How romantic!

Numerous studies have found that houseplants can reduce air pollution indoors. Benzene, formaldehyde, and hexane are just a few pollutants that plants can break down. Florist’s chrysanthemums and Gerbera daisies are just two flowering plants that are very effective at reducing indoor air pollution. In addition to filtering air, plants also increase humidity.

Flowers can be used to make many beauty products such as soaps, toners, and creams. If you have a lot of roses in your garden this summer, you may want to try making rose water toner, which helps tighten pores and cleanses skin-plus it smell heavenly! Dried flowers, such as lavender and chamomile, can also be added to handmade soaps or to bath water. Calendula flowers can be used to make an excellent lotion.

Some flowers make great companions to other plants. Certain flowers repel insects away from other plants, or attract beneficial insects. For example, marigolds are known to repel nematodes and insects such whiteflies and tomato hornworms. Planting them next to vegetables – especially tomatoes – can help protect those plants. Planting certain flowers and cover crops can increase soil fertility and act as a weed suppressant for other plants.

When I think of wearing flowers, I usually think of wearing a corsage or hair accessory; however, some people take it to the next level. One man in China had a dress made of real, red roses made for his girlfriend for his wedding proposal! Fashion shows featuring clothing made of flowers are not uncommon and can be quite spectacular. On a more realistic note, linen and cotton are both made from flowering plants.

Have you ever watched the Tournament of Roses Parade on New Year’s Day? Those spectacular floats are made of thousands of flowers. The average float is said to use approximately 100,000 flowers. Designing and building these elaborate floats takes months of work.

Flowers and insects seem to be a natural combination-but not always. Some plants are used to make pesticides. For example, one type of chrysanthemum flower is used to make pyrethrins, a powerful pesticide used to kill lice, flies, beetles, mosquitoes, and roaches. The citronella plant is another common insecticide; you have probably encountered it in the mosquito repellant aisle at the store.

Flowers are amazing and multifaceted (just like you!) Take the time to enjoy their many uses and share some stems with friends!