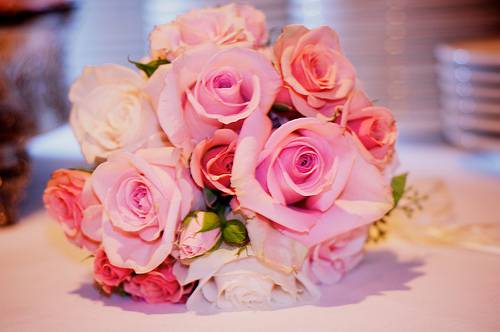 Through the years, I’ve had the honor of helping to plan the weddings of many nice couples. Oftentimes, both the bride-to-be and the groom have lots of creative ideas concerning their reception. But, I’ve found that many of them are a little unsure when it comes to wedding etiquette in regard to the ceremony. They are also puzzled by some of the wedding jargon they hear. I thought it might be helpful to engaged couples if I were to define some commonly used wedding jargon and outline some basic points of wedding etiquette.

Attendants for the Bride and the Groom

The number of attendants in a wedding party depends upon the preferences of the bride and groom. The standard group of wedding attendants includes: a maid of honor, bridesmaids, a best man, groomsmen, a flower girl, a ring bearer, and ushers. The specific responsibilities of an attendant depend on the person’s title. For instance, the maid of honor (MOH), or matron of honor if the woman is married, helps the bride to get dressed for the ceremony, signs the marriage certificate as a witness and generally does anything she can to take the pressure off the bride. The responsibilities of a best man are somewhat similar to those of the maid of honor. He picks up the groom’s tuxedo, makes sure he arrives at the church on time and offers to throw a bachelor party. The main responsibility of any attendant is to be there to support the bride and the groom.

I advise my engaged couples to first decide on the total number of people they want at their wedding. Generally, this number is closely tied to their budget. It’s helpful to make three lists. The first list should include the couple’s close family and friends. The second and third lists can include others who are not as close. Usually, a couple will transfer just a few names from the second and third lists to the first one. That list becomes the final copy.

What to Send and When to Send It

Where Do We Sit?

The placement of guests depends on the type of wedding ceremony a couple is having. If it’s a Jewish ceremony, the family and friends of the bride sit on the right side of the venue. A Catholic ceremony places the bride’s family on the left side. If it’s a non-denominational ceremony guests may sit anywhere they like. The ushers are in charge of directing guests to their seats. Close family members sit in the first two rows. After the grandmothers are taken to their seats, the last people to sit are the mothers of the groom and the bride.

As their special day draws near, many couples tend to stress out about the actual ceremony. They wonder who walks when and who follows whom? The movement of the wedding party during the ceremony is called the processional.

Here is the standard wedding party processional after the officiate and groom take their places at the front of the venue:

1st-Bridesmaids are escorted down the aisle by groomsmen.

2nd-The maid of honor is escorted by the best man.

3rd-The ring bearer and flower girl walk down the aisle.

4th- The guests rise as the bride walks the aisle with her father.

After the ceremony is over, the newly married couple walks (or runs) back down the aisle together. The movement of the wedding party at this stage is called the recessional. The couple is followed by the flower girl and ring bearer. The maid of honor follows alongside the best man, then come the bridesmaids and groomsmen. The mother and father of the bride are next followed by the mother and father of the groom. After the grandmothers and grandfathers exit, then the guests can begin to file out row by row.

I know that this is a lot to remember, but as I tell all my couples, that’s why we have wedding rehearsals! Cheers! -Sophie

I love to hear your comments and questions. Feel free to contact me here or on social media!