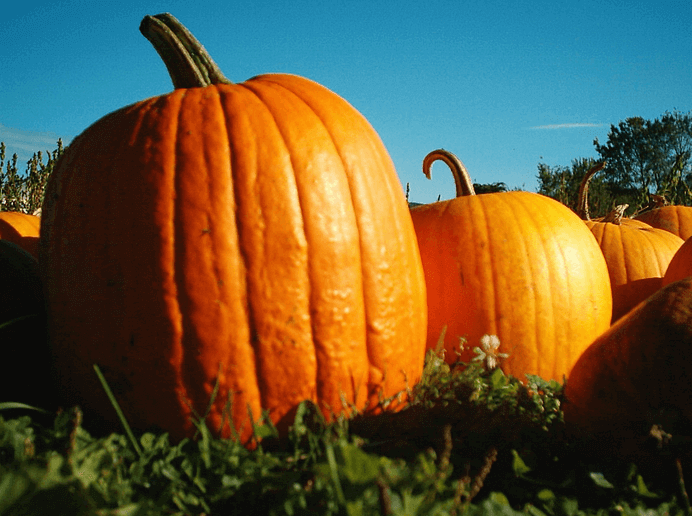 Do you love pumpkins? I love everything about pumpkins, including their interesting shapes, their deep orange color, and even their prickly stems. I especially love roasting pumpkin seeds and eating them with a little cinnamon sprinkled on top. You may have figured out that this week’s post is all about pumpkins! I hope you learn something new about these beloved favorites.

Pumpkins have always been pumpkins, right? Well, over the centuries, the word changed while the fruit stayed the same. The Greeks came up with the original word for pumpkin, which was pepon. The word pepon was transformed into the word pompon by the French. When the English were introduced to pompons, they called them pumpions. Finally, when the colonists in America took a liking to pumpions, the name gradually changed to pumpkins! Regardless of their changing name, pumpkins became a fast favorite throughout the world.

The Health Benefits of Pumpkins

Pumpkins contain a lot of things that are beneficial to the body. For instance, they have a high amount of fiber, vitamin C, and potassium. These nutrients can boost your heart’s health, keeping your blood pressure at a normal level. Also, they can help protect you from developing asthma. Beta-carotene is another nutrient in pumpkin, and it can prevent prostate cancer along with other types of cancer. Vitamins E and C in pumpkins contribute to good eye health. Other beneficial elements in pumpkins include iron, thiamin, magnesium, and vitamin B-6.

If you want to try growing your own pumpkins, you need to start with quality seeds. Next, find an area for your seeds that receives full sunlight. Plant the seeds one to two inches deep in the soil, and water the ground whenever it begins to dry out. Be sure to plant your seeds after you begin to get a string of days that are 70 degrees or warmer. Most pumpkin varieties take at least 85 days to mature, but they are well worth the wait!

History of the Jack-o’-Lantern

Jack-o’-lanterns have been around for centuries. The story behind the jack-o’-lantern started in Ireland. Legend has it that a man called Stingy Jack invited the devil to have a drink with him. When Jack finished his drink, he didn’t want to pay for it, so he convinced the devil to become a coin that could be used to pay. The devil complied, and Jack put the coin into his pocket next to a cross that wouldn’t allow the devil to change back. When Jack died, the devil didn’t want him in Hell and Jack couldn’t make it into Heaven, so he wanders the earth with a lantern made from a lit candle inside a turnip. People in Ireland and Scotland began carving jack-o’-lanterns to scare Stingy Jack away. The practice grew from there, and now, people throughout the world carve pumpkins to make jack-o’-lanterns.

Get Creative With Your Pumpkins

Maybe you carve a pumpkin every October to put on your front porch. That’s great! But there are many other creative ways to use a pumpkin this time of year. One example is to make a small- or medium-sized pumpkin into a candle holder. Simply cut off the stem of the pumpkin and stick a candle into the hole. Another idea is to make a bird bath or bird feeder out of a pumpkin. This homemade outdoor décor celebrates the season and helps the birds around your neighborhood! I make a pumpkin bird feeder each year and hang it from a large tree near my window so I can see all of the feathered activity. Or you can make a pumpkin vase by emptying out the contents of a large pumpkin and putting a glass bowl inside it to support your flowers. This draws attention to both your beautiful fall arrangement and the container you put it in.