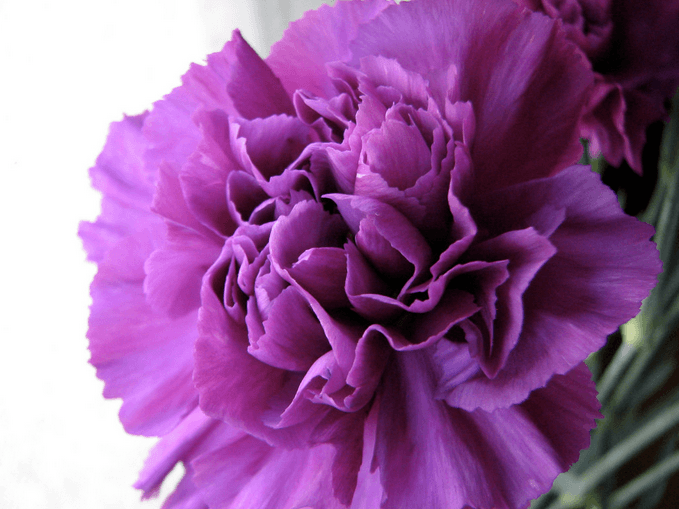 Carnations are cheerful flowers that are at home in any number of places. For instance, in the springtime, you may see a carnation pinned to the lapel of a young man’s prom tuxedo or in a bride’s bouquet. You’re likely to see them tucked into a vase alongside a gathering of daisies or roses. It’s no wonder this popular bloom is the official flower of January.

A Look at Carnations

“Dianthus” is the scientific name for carnation. The term “Dianthus” is made up of two Greek words. “Dios” relates to the Greek god Zeus, and “anthos” translates to “flowers,” so carnations are sometimes referred to as “the flowers of god.” Greeks and Romans used carnations to make different types of garlands. These flowers are both decorative and practical. After blooming, they continue to look fresh for several days after they’re clipped. Put them in distilled water and these flowers can beautify your home for two weeks!

When you think of carnations, you are likely to picture them in bright red or pure white. However, they are available in many other colors, including pink, green, yellow, and purple. There are even carnations featuring a striped design! I like to have a vase full of carnations in my kitchen at all times. Sometimes pink and red carnations share space in my vase. At other times, I put carnations of a single color out on display. There are so many colors that I can choose carnations that reflect my mood on any given day.

Where Do Carnations Grow?

Carnations are native to Eurasia. They arrived in the United States back in 1852 in a special shipment from France. Today, these flowers are grown commercially in Colombia, Spain, Monaco, Kenya, and Israel. In America, there are commercial growers in California and Colorado who produce carnations.

Caring for Your Flowers

If you’re interested in getting some carnations, you’ll be glad to know they are easy to grow. They need to grow in a place that receives full sunlight for several hours each day. Also, they must be kept in moist, well-draining soil. It’s necessary to pinch or cut away dead or wilting carnations in order to prompt regrowth.

If you’re looking for flowers that are both long-lasting and colorful, your search is over. Whether it’s a single carnation in a delicate vase or a large bouquet of brilliantly colored carnations, they are guaranteed to add some cheer to your home.