Accessibility
You are here: Home » Blog » Ever Wonder Why Flowers Make You Happy? 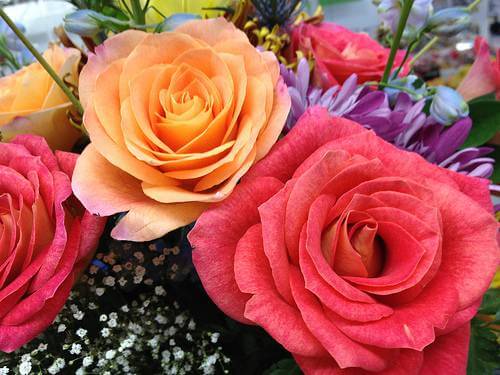 People have been giving flowers for thousands of years – there is written evidence that ancient Greek, Roman, Egyptian, and Chinese civilizations all used flowers to communicate feelings, meanings, and ideas. Famous botanist and horticulturist Luther Burbank once said, “Flowers always make people better, happier, and more helpful; they are sunshine, food, and medicine for the soul.” Burbank was ahead of his time; scientists have proven that Burbank was right in several studies. Of course, you and I have known that flowers make you happy for a long time – but did you ever wonder why?

A famous study conducted by researchers at Rutgers University found that flowers have both an immediate and long-term effect on mood – but why and how? One reason is probably due to color. The effect that color has on mood has been known for a long time. Flowers affect mood in different ways. Pinks, peaches, and warm colors tend to provide a feeling of nurturing and are great for people who are sick or grieving, while reds and oranges are known to be colors of passion and sensuality, for example. Blues and purples promote relaxation and tranquility, while bright, contrasting colors signal celebration. I love being surrounded by flowers at work and at home; I know from personal experience that they diffuse my stress as well as that of my co-workers.

The fragrances of flowers also elicit feelings of happiness. Aromatherapy has been used in homeopathy for a long time, and now science backs it up. A chemical in roses that gives them their famous scent has been shown to elicit feelings of happiness and being in love. So I guess taking the time to stop and smell the roses is well worth it! Some other flowers with therapeutic scents are gardenias, lilies, hyacinths, and lily of the valley. I keep fresh lavender sprigs on my nightstand to help me get a good night’s sleep; when I don’t have fresh lavender, I use sachets from lavender that I have dried.

The fact that someone cares enough to send flowers would be enough to make anyone happy. Flowers have been used for centuries to convey messages of love and friendship. However, a study commissioned by the Society of American Florists and conducted by Rutgers University showed that receiving flowers increased the study subjects’ contact with friends and family, even if the flowers were not sent by friends or family, and that flowers created an ambiance of sharing and welcome. Of course, connecting with friends and family in this manner leads to increased happiness. Flowers also provide a connection with nature, which has also proven to lead to increased positive emotions.

There is also a new theory that flowers have evolved to cause happiness in people. I always knew there was something sneaky about those seemingly innocent flowers! The theory has it that flowers elicit positive emotions, which make people better survivors, which in turn benefits flowers and plants. How? Many flowers and plants depend on people to spread their seeds, fertilize them, and help them to grow. It’s a symbiotic relationship. I find this fascinating, and I can’t wait to read the future research findings on this subject.