Accessibility
You are here: Home » Blog » Endangered Flowers That Will Leave The World A Little Less Beautiful 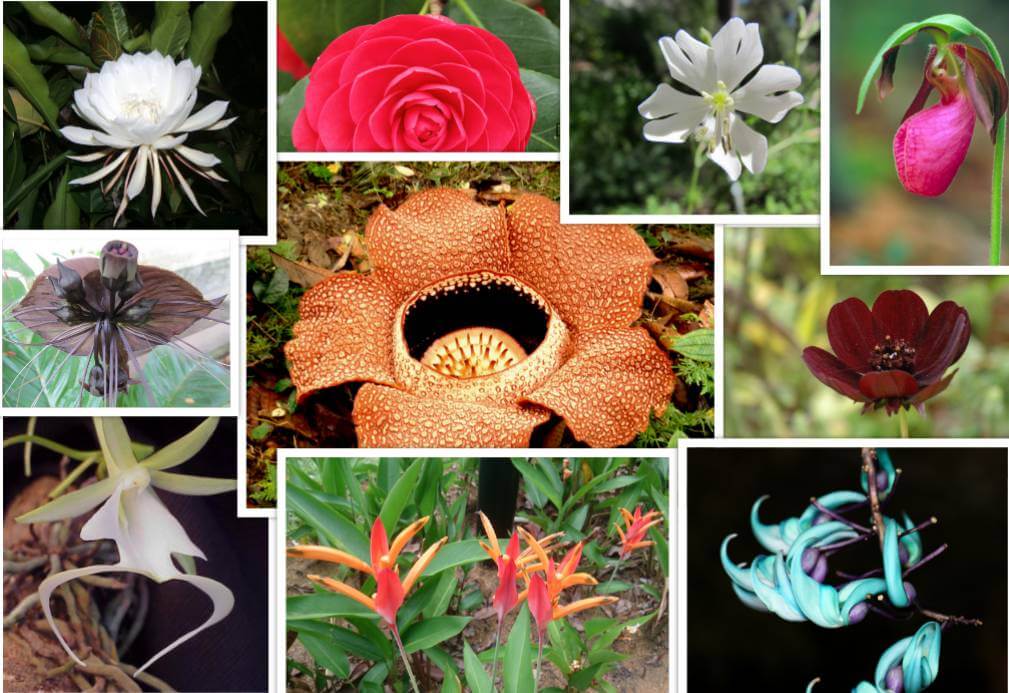 I know you’ve heard of the endangered animals list, but did you know there’s a list for endangered flowers, too? Flowers throughout the world become endangered for a variety of reasons. Habitat destruction such as flooding, logging, or building can put flowers at risk for extinction. Climate change that brings on flooding or extreme changes in temperature can also affect the flower population. Plus, some types of flowers become very popular with the public and are overused. These 11 flowers are among those that might not be around much longer.

Rafflesia: This flower has leather-like petals and a scent that earned it the nickname of “corpse flower.” Raffelsia grows only in southeastern Asia, where it’s endangered due to the logging activity and land-clearing occurring in its habitat.

Black Bat Flower: The black bat flower is actually deep purple with petals that measure 12 inches in diameter. It’s a tropical forest-dweller found in the Yunnan Province of China. It needs adequate air circulation and shade to grow. It’s on the endangered list because without the right environmental conditions, this flower dies very quickly.

Green Jade Flower: This flower has a distinctive appearance featuring pale green petals paired with purplish buds. Bats pollinate these blooms that are native to the Philippines as well as Hawaii. Deforestation is the reason why this flower has made the endangered flower list.

Parrot’s Beak: The bright orange petals of this flower curve upward, giving it the appearance of a parrot’s beak. There are very few of them still around in their native home of the Canary Islands. A particular species of sunbird was the main pollinator of these flowers. However, these birds are now extinct, landing parrot’s beak on the endangered flower list.

Pink Lady’s Slipper: This bright pink flower is a member of the orchid family and features cupped petals that have the appearance of small slippers. This bloom is found in hardwood forests in North America. Its endangered status is due to the long period it takes to grow.

Middlemist’s Red: The Middlemist’s Red is named after John Middlemist, who brought this flower from China to England in the early 19th century. There are just two Middlemist’s Red flowers in existence today. One of them is in New Zealand, while the other is in West London. These cheerful flowers have pink, scalloped petals. It seems that their lovely appearance led to over-cultivation and its endangered status. I love this flower and have a photo of it hanging over my desk at home.

Chocolate Cosmos: At first, I thought this might be a delicious chocolate dessert! But no. It’s a flower with a chocolate scent that blooms in the evenings. It originated in Mexico and has a collection of deep brown, rounded petals. The real chocolate cosmos flower has become extinct, but there’s an infertile clone that has been cultivated. The chocolate cosmos propagates by its roots instead of its seeds, which may explain how it made its way onto the endangered flower list.

Kadapul Flower: The thin, pointed petals on this flower are a combination of pale yellow and white. It’s native to Sri Lanka, and when it blooms, it releases a beautiful scent. After blooming at midnight, this flower immediately starts to wither. Its endangered status is due to its short life span.

Gibraltar Campion: The Gibraltar Campion has pale pink or violet petals separated into pairs. It’s native to the cliffs of Gibraltar and was thought to be extinct back in the early 1990s due to the destruction of its habitat. But a Gibraltar Campion was spotted a few years later by a hiker exploring the cliffs. This flower is now on the endangered list and is making a comeback due to the efforts of botanists at the Royal Botanic Garden.

Ghost Orchid: This endangered flower lives up to its name. It is white, has no leaves, and gives the appearance of floating. Some people say it looks like a white frog jumping into the air. The ghost orchid is native to the United Kingdom, but there are some growing on trees in areas of Southwest Florida. Logging activity in Florida has reduced the number of these flowers, putting it under the protection of Florida law.