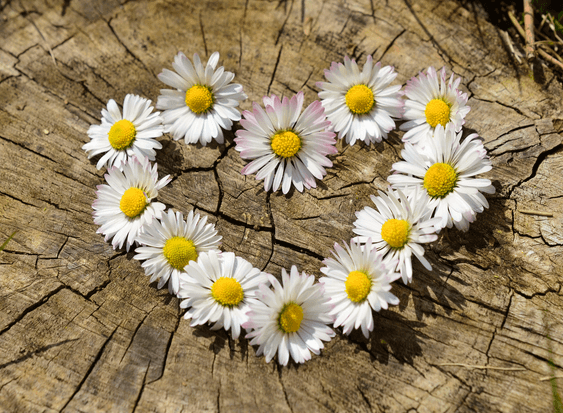 I love to look at the yellow Gerbera daisies in my garden. They are so cheerful and bright. It’s no wonder that the daisy is the official flower of the month of April. I have a friend who had a baby last week, and I took a vase of daisies to her in the hospital. She put them in the window of her room so she could admire them from her bed. I’ve found that daisies are right at home in almost any type of bouquet. Since April is the month for daisies, I thought I’d spend a little time focusing on this lovely bloom. Enjoy!

Background of the Daisy

There are many types of daisies, such as the African daisy, the Oxeye, the English daisy, and the Shasta daisy. But the Gerbera is the most popular type of daisy, and it dates all the way back to 1884. A Scotsman named Robert Jameson discovered this distinctive flower growing in Barberton, South Africa. During the Victorian era, the daisy came to symbolize innocence, joy, loyalty, modesty, and trust. Daisies come in all sorts of colors, including yellow, white, red, orange, pink, violet, and cream.

Where Do Daisies Grow?

Daisies of all types grow in Africa, northern Europe, and other places throughout the world. They do well in open fields and gardens and on hillsides. Some people even grow them indoors. However, daisies don’t grow in places located in the extreme north or south. You won’t see any daisies growing in Antarctica!

Gerbera daisies should be planted in areas that receive partial to full sunlight. The petals of these daisies can measure two to five inches in width, so leave plenty of space between each flower in your garden. Plant seeds or bulbs in nutrient-rich soil and water the flowers in the morning if there hasn’t been much rainfall. Watering flowers in the morning gives them a chance to dry off and can prevent mildew from forming on the petals. Be sure to remove dead flowers to allow others to grow in their place.

So when you think of April, remember all of the remarkable types of daisies growing around the world!