Accessibility
You are here: Home » Blog » 11 of the Worlds Most Unusual Flowers 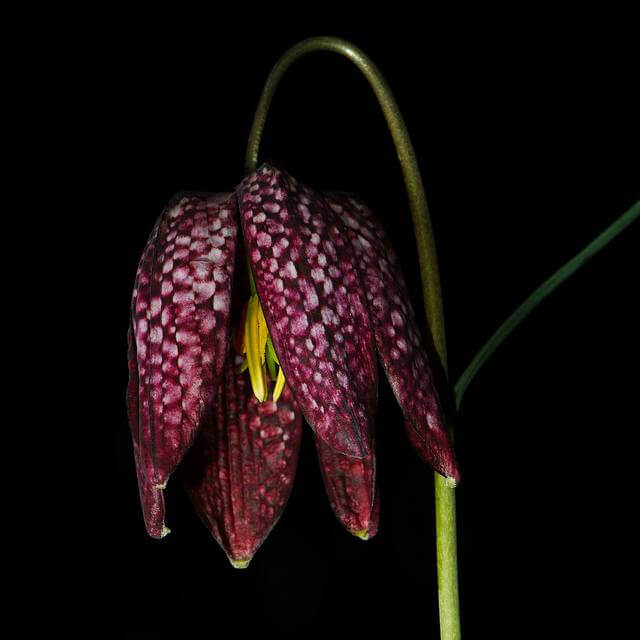 In the past, I have posted about carnivorous plants, foul-smelling flowers, and flowers that bloom in the moonlight; you may be thinking that I’ve written about most of the unusual flowers in the world, but that is not the case! It seems like the list of unusual flowers goes on and on and that more are being discovered every day. I never tire of learning about them, either! I have compiled a list of 11 unusual flowers that range from the rare and endangered to ones that you can grow at home.

This flower is unusual because it is the blackest naturally occurring flower known in the world. The long, tubular black flowers droop from stems that can reach 6 feet tall. In addition to being black, they appear to be wilted, which makes the common name “flower of death” quite fitting. However, it earned the name because where it grows, in Mexico, locals plant it near graves. You can try your hand at growing this tender perennial by buying seeds online.

This fascinating tree is found in Malaysia and other tropical areas. The flowers consist of unremarkable white petals with a spectacular mass of pink-tipped, white filamentous stamens. The entire flower resembles a pink puffball similar to the flowers of the mimosa tree. The common name “sea poison tree” was given for good reason: All of the parts of the tree contain saponin, a poison that local fisherman use to stun and kill fish. It grows among mangroves, and the fruit can float on the water for years until it is washed ashore and the seeds germinate.

The torch ginger lily is a gigantic tropical beauty, generally reaching 12 to 15 feet in height. The large, showy flowers can be pink, red, or orange, and they attract birds, bees, and butterflies. For those of you in tropical climates, these beauties will thrive in the right conditions outdoors but are too big for containers.

Once you see this plant, you will know why its common name is parrot’s beak. Lotus berthelotii is a perennial vine in the tropics and is grown as an annual elsewhere. The bright red flowers contrast nicely against silvery green needle-like foliage. It is native to the Canary Islands, where it is endangered in the wild, but it can be found for sale in nurseries.

As a chocolate-lover, I find this plant hard to resist; it both looks and smells like chocolate! The flowers have the shape of traditional cosmos but are a maroon to nearly black color. Chocolate cosmos are a tender, tuberous perennial native to Mexico; in areas with cold winters, they need to be taken out of the ground and stored in a cool basement or garage.

The stunning blue-green color of the jade vine is so unusual that I first thought it was dyed; however, the color is all natural. The pendulous stems can hold up to 90 little claw-shaped flowers, which are pollinated by bats in the wild. Jade vine grows in the forests of the Philippines and is endangered in the wild.

I have never seen a flower quite like this striking Australian wildflower with its red claw-shaped petals and its round, purple-black center. It is the floral emblem of South Africa, and it is said that aborigines eat the seeds of the plant. Sturt’s desert pea is a tender perennial and does not tolerate wet conditions.

I think this has got to be one of the most bizarre flowers that a person can grow. Words fail me when I try to describe this flower, and really, you have to see it to believe it; that is why I am including a picture. The plant is native to south Asia, and it requires a special soil mixture, high humidity, and moist soil. It can be grown indoors or outdoors but will not tolerate direct sun or cold winters. I think growing something this different is worth the extra care if you are a plant-lover.

Looking at the miniscule, delicate flowers of the bladderwort plant, you would never guess the sinister truth. Beneath the flowers lay a network of very small, hollow torture chambers ready to suck in and digest aquatic insects. These plants can be terrestrial, aquatic, or epiphytic, although they may not look like much when not in bloom. They can be grown in the home in a sunny environment if you provide them with pond or lake water that contains little creatures for them to feast on.

Snake’s head fritillary is also known as the checkered lily due to the distinctive checkerboard pattern on its mauve to purple flowers, although sometimes the flowers can be all white. The checkered lily is a wildflower native to damp meadows and grasslands in Europe and especially the United Kingdom.

Bleeding heart is proof that you can find unusual flowers in your own backyard. Most of us have seen these pink, heart-shaped perennial flowers, but that does not make them any less unusual. Bleeding heart plants prefer a moist, shady environment and can even be grown in containers. If you already grow this species of bleeding heart, consider growing a different species like Dicentra cucullaria, commonly known as Dutchman’s breeches.